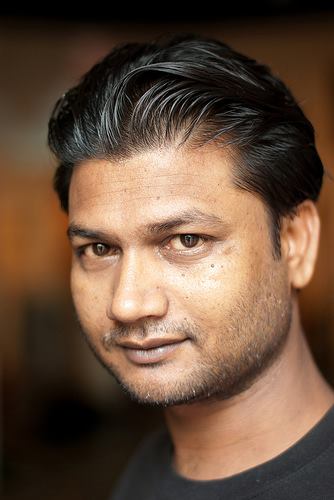 Almost entirely displaced by cheaper printed versions in the 1940s, today, the tradition of Kalighat painting has been renewed by some of the descendents of the original patuas like Anwar Chitrakar. In addition, the tradition has evolved, and contemporary Kalighat paintings reflect a number of new subjects including modern family life, social evils and global events. Anwar Chitrakar lives and works in Naya village, a community of 'patuas' or artists and their families, in Midnapore, West Bengal. Originally working as a tailor, Anwar now strives to revive the lost glory of Kalighat 'patas' through his work, combining traditional techniques with contemporary subjects and sensibilities. Local and global events, including the Naxalite violence in his state and the attacks on the twin towers in New York have featured in his paintings alongside traditional subjects like Kali and the ubiquitous Bengali babu. In 2006, he was honoured with the President's Award, and his paintings several prestigious collections including that of the Victoria & Albert Museum, London.